In this blog article, I’ll discuss the sounds and history of Afro Brazilian Music with Hungarian musician Szabolcs Bognar aka Àbáse.

I had the pleasure of meeting Szabolcs at the XJAZZ festival 2022 last May, and since the beginning of the show – supporting the opening act by Mop Mop as a keyboardist – he has created a perfect harmony between drums and vocals.

Indeed, it is no coincidence that Àbáse (both his stage name and band project) stands for “collaboration” in the west African Yoruba language, which is a key element of Àbáse’s music.

Speaking of that, he realized early on his love for the keyboard.

I felt more connected to the keyboard because it just encompasses everything. You can play rhythm, bass, harmony, and melody.

Szabolcs has been living in Berlin since 2018, growing up in a music-loving household surrounded by CDs in Budapest. He started to take piano lessons around 15 and bought his first turntable and mixer at 17.

Thanks to his brother’s collection of contemporary music influenced by Brazil, he discovered a new musical world. Szabolcs fell in love with Brazilian sounds since the beginning, and in 2017 he made a dream come true: to go to Brazil.

“When I first came across Candomblé, that was the first time when I fully understood why I had to be there.”

Everything Szabolcs loves in the contemporary Brazilian styles comes from Candomblé, which is connected to the Yoruba religion of West Africa. And that’s when he fully understood sonically and spiritually that those influences were now indistinguishable from him.

Blending West African and Brazilian Rhythms, Laroyê was created during those five months in Brazil, jamming with Brazilian musicians and finding inspiration through Afro-Brazilian sounds.

80% of the sounds you hear on the album were done just like in those five months. I wanted to keep it as row and organic to the experience as possible.

In my view, Laroyê is an uplifting switching style of contaminations that makes you feel you’re travelling without moving – it is an album that warms your heart.

In today’s interview, Szabolcs talks about his life-exchanging experience in Brazil and the creative process around Laroyê.

In addition, read this blog article: A Journey into Afrocentric Music with Dj Khalab

09:36 THE IMPORTANCE OF CLUB CULTURE

16:27 EXPLORING BRAZIL AND ITS MUSIC CULTURE

WOULD YOU LIKE TO DISCUSS TODAY’S TOPIC WITH A WORLDWIDE COMMUNITY OF MUSIC ENTHUSIASTS?

In the Music Travel Guide Online Meetups, we have the exciting opportunity to connect with passionate DJs, musicians and vinyl collectors.

It’s an open space for music lovers like yourself, speaking about record collecting, the music industry and all things black music.

Are you ready to be part of it? 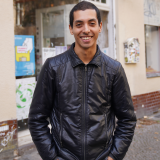